Alexandra Luke dedicated her life to the creation, exhibition, promotion, and study of abstract art. Following studies at the Banff Centre and at the Hans Hofmann School of Fine Art in New York, she returned to Toronto inspired at the prospect of promoting Abstract Expressionism in that city and beyond. During the 1950s, Luke directly or jointly organized several group exhibitions of abstract art. Of course, in Canada, as virtually anywhere in the world during the 1950s, being taken seriously as a woman artist presented a considerable challenge. Moreover, Luke had to overcome not only the internal sexism of the art world, but also a further bias and resentment regarding her privileged background. Even so, her own work was widely exhibited and received positive reviews. Unlike Jack Bush or Harold Town, however, she struggled to sell her works. With the beginning of the 1960s, however, and as her reputation solidified, she was invited to join various artistic societies. This was a timely development, as the Painters Eleven group, of which she was a member, dissolved in 1960. 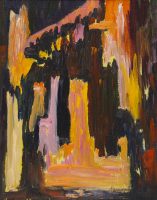