Chinese-French artist Chu Teh-Chun was born in 1920, in Xiao County, Anhui Province, China. He grew up under the influence of his grandfather, a collector of art and poetry, from whom he inherited his passion for art. As a child, Chu experimented with ancestral techniques such as Chinese calligraphy and ink-wash painting, and he later received formal training from modern artist Pan Tianshou. In 1935, Chu pursued his studies at the Hangzhou National College of Art (now the China Academy of Art), where he met Wu Guanzhong and Zao Wou-Ki. Chu relocated to Paris with his wife, Chu Ching-Chao, in 1955, during a period of great artistic effervescence.

Chu bridged Western art trends with traditional Chinese art, creating abstract landscapes imbued with poetry. His use of lyrical abstraction combined with Chinese calligraphy distinguished him from his contemporaries. In 1997, he became a member of the Institut de France (Académie des beaux-arts)—the first Chinese artist to join the prestigious institution. In 2010, when he was 90 years old, the National Museum of China, in Beijing, presented a retrospective of his work. Chu died in Paris in 2014 and is buried in the Père-Lachaise cemetery. 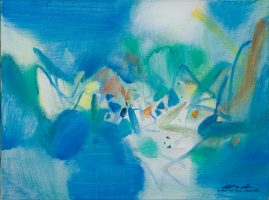