Edmund Alleyn was born in Québec in 1931, and studied at the École des beaux-arts de Québec. In 1955, he won the Grand Prix from the concours artistique de la Province de Québec, and received a grant from the Royal Society of Canada. That same year, he left for France, where his style would evolve from abstraction to the figurative. Alleyn remained in France for fifteen years, returning to Québec only after the Quiet Revolution. The major societal changes he observed in his home province had an impact on his art, which underwent several stylistic changes over the course of his career. Alleyn’s work defies easy categorization; its roots can be traced back to lyrical abstraction, the art of Western Indigenous people, the world of technology, and the tools of mass media.

Alleyn represented Canada at the Venice Biennale and at the Sao Paulo Biennale in 1959, and made headlines in 1970 with his Introscaphe at the Musée d’art moderne in Paris. He exhibited regularly throughout Canada and the U.S., and taught at the University of Ottawa for fifteen years. He died in Montréal in 2004. In 2016, the Musée d’art contemporain de Montréal held a major retrospective of his work titled, In my studio, I am many, to highlight the multiple artistic personalities of this important artist. 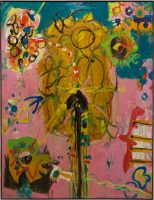 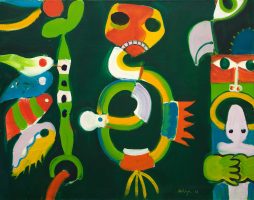