Fritz Brandtner was a painter, draftsman, muralist, and teacher born in Danzig (now Gdansk), Poland, who settled in Winnipeg, Manitoba, in 1928. Best known for having introduced German Expressionism to Canada, Brandtner contributed to the development of modern art in this country by acting as a conduit of ideas between the Canadian milieu and Europe’s avant-garde. However, Western audiences were less than receptive to this bold new current; on the advice of Lionel LeMoine Fitzgerald, then director of the Winnipeg School of Art, in 1934 Brandtner decided to try his luck in Montreal. Once established, he was introduced to other modernists such as John Lyman, the future founder of the Contemporary Arts Society. Brandtner also met Dr. Norman Bethune, who, like Brandnter, had served in World War I, and whose humanitarian values he shared. In 1936, the artist presented his resolutely abstract paintings—a Montreal first—at an exhibition fundraiser for the Canadian League Against War and Fascism, and he later helped establish an art centre for underprivileged children. Brandtner worked in several media, including oil paint, watercolour, graphite, charcoal, linocut, and encaustic, and also taught art. Whether he was working in landscapes inspired by his travels, in still life, portraiture, or war imagery, Brandtner’s works are generally marked by exuberant colour and aggressive black outlining; one perceives, variously, the influences of Cubism, Expressionism, the Bauhaus, and even Surrealism. In 1946, he was awarded the Jessie Dow Prize for his watercolours. Brandtner’s work was the subject of some fifteen solo exhibitions in Canada between 1934 and 2012. 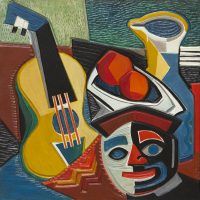 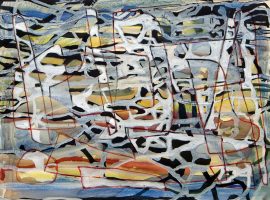 Looking Through The Curtain 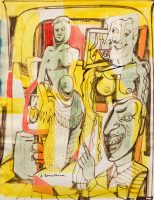 Figures in an Interior