Henry Moore was born in Castleford, UK, in 1898. In 1919, he took up studies at the Leeds School of Art (now the Leeds Arts University). From 1921 to 1924, he studied at the Royal College of Art, in London, and visited Paris (1923) and Italy (1925) thanks to a scholarship. He taught at the Royal College of Art from 1924 to 1932, and at the Chelsea School of Art from 1932 to 1939. Considered one of the most influential sculptors of his generation, Moore drew inspiration from a mix of artistic trends and styles throughout his prolific career, including abstraction, Surrealism, primitive art, and classical art, creating forms that were at once innovative and familiar, accessible and avant-garde. His monumental works bring out the power of organic imagery while maintaining a fertile relationship between materiality, the installation site, and the spectator. 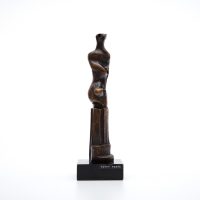