Although he never left Toronto, Bush, by the last decade of his life, had become Canada’s most internationally famous artist. He had his first New York solo exhibition in 1962 at the Robert Elkon Gallery, subsequently joining the Andre Emmerich Gallery. In 1965 he accepted exclusive European representation by the Waddington Galleries in London, and in 1967 exclusive Canadian representation by the David Mirvish Gallery in Toronto. In the meantime, in 1964 he participated in Clement Greenberg’s period-defining exhibition Post Painterly Abstraction. Most recently, in 2014, the National Gallery of Canada staged a monumental retrospective of his work.

Bush was a charter member of Toronto’s Painters Eleven, but his mature work is primarily spoken of in the context of his colourfield colleagues such as Morris Louis, Kenneth Noland, Frank Stella and Jules Olitski, who shared a commitment to the mastery of the flatness of the canvas support unsullied by illusionistic space, to an openness and clarity of presentation, to anonymous execution, to geometric regularity, and to the declaration of high keyed lucid colours, paint so thinly diluted as to soak into unsized and unprimed cotton canvases.

Even so, Bush was also the odd man out, rarely given to either anonymous execution or geometric regularity. He did not defer his imagery to impersonal techniques, like Louis’s pourings or Olitski’s sprayings, but consciously hand-drew his edges and hand-crafted his shapes, often revelling in mischievous awkwardness. At the same time he defied the imperatives of postpainterly abstraction art by inhabiting his pictures with references to images and signs that refer to the world outside the painting, to such things as women’s waistlines, flower gardens, travel souvenirs, flags, and road signs. His paintings therefore flirt with figure-ground constructions and tease us with the space of figuration, always, however, keeping his surfaces taut and flat. 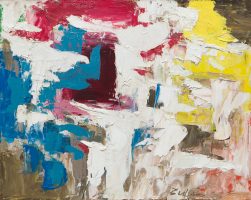 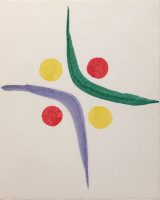 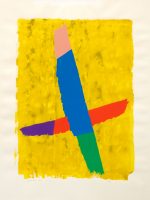