John Little was born in Montreal, Quebec, in 1928. He studied two years at the Musée des beaux-arts de Montréal under Arthur Lismer and Goodridge Roberts. Subsequently he went to New York, where he attended the Art Students League under Will Barnet and Frank J. Reilley. On his return to Montreal in 1951, he became a draftsman in his father’s architectural firm (Luke and Little). He married in 1953, and turned exclusively to painting. His street scenes won him wide acclaim, and his paintings of Old Montreal and Quebec City streets, houses, and countryside were exhibited at the Watson Art Galleries. Little also produced covers for Maclean’s magazine, in which his great sense of humour meshes with his artistic abilities to depict Canadians at work and play. His works can be found in the collections of the National Gallery of Canada, the Beaverbrook Art Gallery, the Sir George Williams University Collection of Art (Concordia University), and many private collections. 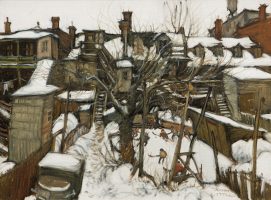 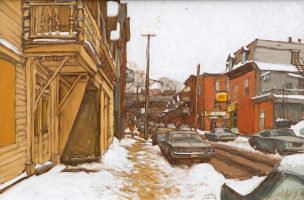