Karel Appel was born in Amsterdam, in 1921, where he studied at the Rijksakademie van beeldende kunsten (State Academy of Fine Arts) from 1942 to 1944. In July 1948, with Constant Anton Nieuwenhuys (aka Constant) and Corneille (Guillaume Cornelis Beverloo), he cofounded the Dutch experimental art group Reflex in Amsterdam. In November of that year, he co-founded the Internationale des Artistes Expérimentaux, or CoBra, a group that broke up soon afterward. In 1950, Appel settled in Paris. There, he met the art critic Michel Tapié, who took him under his wing and organized an exhibition for him at Studio Paul Facchetti in 1954. That year, his work was the subject of a first exhibition on American soil, presented by Martha Jackson in New York. It was not until 1957, however, that Appel himself travelled to the United States and Mexico, to which he would make more many trips. New York became the centre of his art career during this period. He regularly frequented the Abstract Expressionists—most notably Sam Francis, Franz Kline, and Willem de Kooning—as well as the jazz scene, through which he met Miles Davis, Dizzy Gillespie, Count Basie, and Sarah Vaughan. Like his compatriot De Kooning, Appel, who never completely abandoned the referents of figuration—if only in his choice of titles—nonetheless favoured a pictorial language in which colour prevails over line. The artist died in Zurich in 2006, at the age of 85 years old. 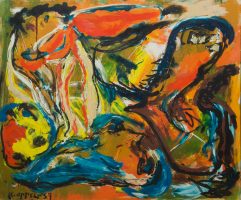 Animals Coming from the Sun 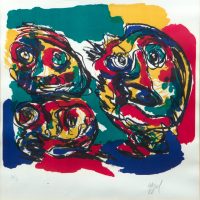