Ray Mead was born in England, and later became a founding member of Painters Eleven, an artist collective formed in 1953 aimed at introducing abstract art to Toronto audiences. As such, he made an important contribution to the development of modernism in Canada. Mead enrolled in the Slade School of Fine Art in London, where he was taught by some of the most important English artists of the time. Shortly after receiving his diploma at the age of 18, he became a fighter pilot for the Royal Air Force. After sustaining an injury in 1941, he was re-stationed in Hamilton, Ontario, then in New York to train US bomber pilots. It is during his time in New York that Mead discovered Abstract Expressionism. At the end of the World War II, he settled in Hamilton and became friends with the artist Hortense Gordon, who had studied under Hans Hofmann, and continued to develop his interest in abstraction under Gordon’s mentorship. He began working as a graphic designer in Toronto for the MacLaren Advertising Company, but continued to take part in exhibitions with Painters Eleven until he moved to Montreal in 1957 and the group disbanded. In the 1970s, Mead switched from oils to acrylic, and in 1987, he returned to Toronto to paint full-time. 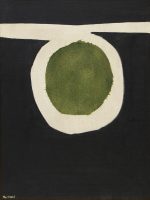