René Richard was born in Switzerland and immigrated to Canada in 1911. His family settled in Cold Lake, Alberta, where he learned the ways of the coureurs des bois and trappers. During a long stay in Northern Canada in the 1920s, Richard began drawing and painting the landscapes he encountered. Eager to hone his skills, he travelled to Paris in 1927 to study painting and drawing at the Académie de La Grande Chaumière. During this time, he visited museums and met landscape artist Clarence Gagnon, who became his mentor. In the early 1940s, Richard settled in Baie-Saint-Paul, Quebec, where he continued painting regional and northern landscapes, including in Ungava, a region that he explored in 1948 and 1951. Richard enjoyed two major retrospectives of his work during his lifetime, both organized by the Musée du Québec (now the Musée national des beaux-arts du Québec), in 1967 and in 1978. He received the Order of Canada in 1973 and was made a member of the Royal Canadian Academy of Arts in 1980. Richard died in 1982 at the age of 86, in Baie-Saint-Paul. 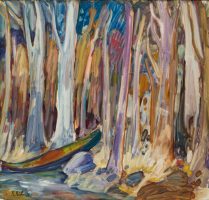 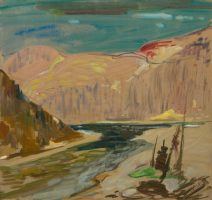