Robert Combas was born in Lyon in 1957 and grew up in Sète. He studied fine arts at Montpellier from 1974 to 1979, and in the 1980s he had a quick succession of solo and group exhibitions. Combas soon gained an enviable reputation that propelled him onto the international stage, most notably in Amsterdam, Düsseldorf, New York, Paris, Seoul, and Venice. As a leader of the figuration libre movement in France (known as Neo-expressionism in North America and parts of Europe), Combas experimented with a number of techniques, adopting an interdisciplinary approach inspired by his fascination with free exploration and marginalized forms of expression such as Art Brut, comic books, and advertising. Characterized by bright colours and black outlines, Combas’s style is free-spirited, spontaneous, and nonconformist. 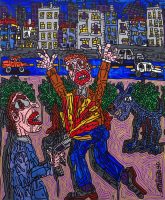