Roberto Pellegrinuzzi is interested in photography as a discipline, as material, and as language, and has continously investigated its history, processes, and physical properties. From his very first works, Pellegrinuzzi has typically deconstructed his images into various planes that are then reassembled onto different supports. The resulting images appear to break down and come together in relation to the angle from which they are viewed. With the rise of digital photography, Pellegrinuzzi now intervenes directly onto his images, separating each one along its visible networks and patterns. Since 1985, his work has been shown in over fifty solo exhibitions throughout North America and in Europe, including the prestigious Maison européenne de la photographie de Paris, where his series Les Écorchés was presented in 1999. 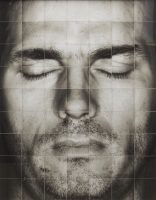