When he arrived in Paris in his early twenties, penniless, without contacts, and not speaking a word of French, Ting Hsiung-ch’uan knew nothing about Western art. While living in extreme poverty, he discovered the work of the Expressionists. Out of admiration for Henri Matisse, he replaced the last syllable of his traditional nickname, Hua La Si (“spoiled”), with the last three letters of the painter’s name, hence the name “Walasse.” Although his encounters with Pierre Alechinsky and other former members of CoBrA were critical, his fortunes really turned when he settled in New York in 1959, with Abstract Expressionism in full swing. Ting met Sam Francis and finally managed to sell some paintings. It was only in the 1970s, however, that he adopted figuration—with a predilection for women, flowers, birds, and cats—perfecting the style for which he would become famous, characterized by expanses of brightly coloured, even fluorescent acrylic, delimited by strokes derived from Chinese calligraphy. In 1981, his quest for exotic colours led him to Tahiti, in the footsteps of Paul Gauguin. Ting is an essential figure of the art world in the United States, of which he eventually became a citizen, and his work has been shown in world-class museums around the globe. After the death of his wife in 1986, he divided his time between Amsterdam and New York, where he died in 2010. 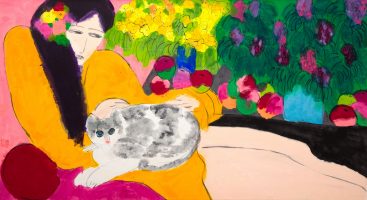