William Perehudoff was a prominent colour-field painter based out of Saskatchewan during some of the most productive and lively years of the Workshops. Beginning in 1957, Perehudoff exchanged ideas with visiting American artists Kenneth Noland, Jules Olitski, and others who travelled to the area specifically for the Emma Lake Artists’ Workshops. In addition to his participation in the workshops, Perehudoff studied art in Colorado Springs, New York City, and London, England. His work was informed by the study of Greek history and philosophy, art history and criticism, the Russian classics, and his Doukhobor heritage. Bill, as he was known to friends, was a highly disciplined artist and endlessly devoted to colour theory.

Perehudoff was a member of the Royal Canadian Academy of Arts, and was awarded the Order of Canada, the Saskatchewan Order of Merit, and the Queen Elizabeth II Diamond Jubilee Medal for his significant contributions to the development of art in Canada. His work is displayed in major museums across the country, including the Art Gallery of Ontario, the National Gallery of Canada, the Remai Modern (formerly the Mendel Art Gallery), the Glenbow Museum, and the Montreal Museum of Fine Arts. A major retrospective of his work called The Optimism of Colour was exhibited across Canada from 2011 to 2012. 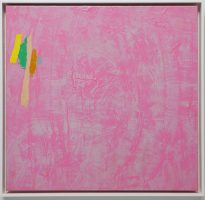