Yves Trudeau received his training at the École des beaux-arts de Montréal. In 1960, he was one of the founders of the Association des sculpteurs du Québec, which later became the Conseil de la sculpture du Québec. He taught at Université du Québec à Montréal, and his works have been presented in numerous solo and group exhibitions. The Côte-Vertu Métro station, inaugurated in 1986, contains his artwork Relief, négatif positif, consisting of two stainless-steel murals. Yves Trudeau is a member of the Royal Canadian Academy of Arts and became a member of the Order of Canada in 1995.

Sculptor Yves Trudeau enjoyed a particularly prosperous period during the 1960s, with one year after another heralding new breakthroughs and major successes. Buoyed by this momentum, the artist worked on multiple pieces simultaneously, a sustained effort that culminated in 1967 with his celebrated Phare du cosmos. Trudeau’s more lyrical, figurative approach of the decade’s earlier years gave way gradually to more formal experimentations marked by abstract and symbolist imagery. An astute combination of wood and metal—the organic and the inorganic, as Jacques de Roussan states—yielded skillfully apportioned works that explored existentialist ideas and elucidated the artist’s struggles and reflections on human nature and the human condition. 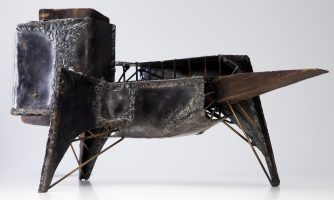 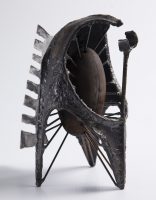 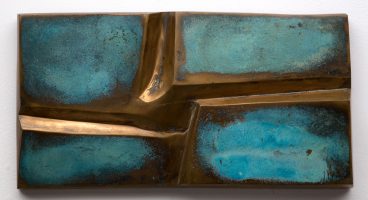