Born in Montreal, A. Y. Jackson commenced his formal art studies around 1898 at Montreal’s Monument National under Edmond Dyonnet, and continued them under William Brymner at the Art Association of Montreal. In May 1913, Jackson went to Toronto, where he met future Group of Seven members J. E. H. MacDonald and Arthur Lismer at the Arts and Letters Club, and later, Lawren Harris. After seeing action in World War I in 1915, Jackson was appointed a war artist in 1917, and worked for the Canadian War Memorials until his discharge in 1919. In the autumn of that year, he participated in Group of Seven’s first boxcar trip to Algoma. A founding member, he exhibited with them throughout the 1920s and into the early 1930s. Jackson was also a founding member of the Canadian Group of Painters, formed in 1933. His great affection for the Canadian landscape, and his high regard for the warmth, independence, and hardiness of those who inhabited it, has informed our sense of nationhood. After a long career—he remained active into his eighties—Jackson spent his last years living in an apartment on the McMichael Conservation Estate (now home to the McMichael Canadian Art Collection), in Kleinburg, Ontario. He died there in 1974. 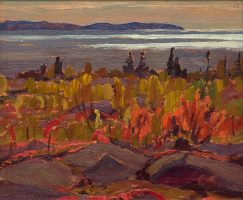