Painter, draughtsman, and industrial colourist Jean Goguen was born in Montreal in 1927. He studied at the École des beaux-arts de Montréal from 1945 to 1950, and was a signatory of the Manifeste des Plasticiens in 1955. Of this, Goguen said, “This endorsement, more tacit than official, should be understood as the outcome of my own journey, as, for me, form, colour, and matter have always been the primary elements that have constituted the very basis of formal discourse.” After a post-Automatiste period characterized by a series of gestural works on paper in black and white ink, Goguen turned to geometric abstraction from 1957 to 1959. In 1959, he took part in the legendary exhibition Art abstrait alongside Guido Molinari and Claude Tousignant. What followed, in the 1960s, was an Op Art period that emerged from, and pushed the boundaries of, his late-1950s work. The balance between form and matter and the dynamics of colour are at the heart of his formal concerns. However, it was through teaching that he continued the theoretical and aesthetic research that he had first examined in his art practice, once he became an art professor at Sir George Williams University (now Concordia University). Goguen’s work was included in several noteworthy exhibitions, including Geometric Abstraction in Canada (Camino Gallery, New York, 1962); Seven Montreal Artists (Hayden Gallery [Massachusetts Institute of Technology], Boston, 1968); and Jean Goguen “abstract mutations”: Works on paper 1951–1959 (Maison de la culture Frontenac, Montréal, 1991). 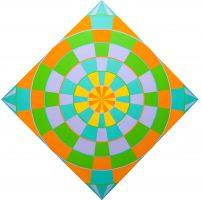