Born in Hull, Québec, Jean-Philippe Dallaire began drawing at the age of 11. He attended the École technique de Hull, and studied drawing at the Central Technical School in Toronto, but was primarily self-taught. In 1938, after spending six months at the École des beaux-arts de Montréal, he received a grant from the Québec government to complete his studies in Paris. During the German occupation of 1940 to 1944, Dallaire was held at the internment camp in Saint-Denis, a suburb of Paris, where he managed to continue making art. He finally returned to Canada in 1945, and taught drawing and painting at the École des beaux-arts de Québec from 1946 to 1952, before working as an illustrator for the National Film Board of Canada until 1957. In 1958, he returned to France and settled in Vence, where he painted continuously until his death in 1965. A first retrospective of his work was presented in 1968 at the Musée d’art contemporain de Montréal, and at the Musée national des beaux-arts du Québec. In 1999, the latter would present Dallaire, a large-scale retrospective on his work, accompanied by an extensive catalogue. Afterward, in 2005 and 2008, the City of Gatineau organized the travelling exhibition Dallaire illustrateur: Extraits des séries historiques. And finally, in 2016, Hommage à Dallaire: Que la fête commence! was presented at the Galerie Montcalm at Gatineau’s Musée du Citoyen, to mark the 100th anniversary of the artist’s birth. 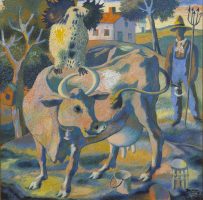 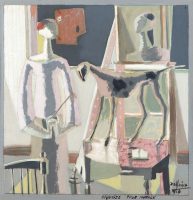