Marcella Maltais was born in Chicoutimi, Quebec, in 1933. Maltais studied under Jean Paul Lemieux and Jean Dallaire in 1949 at the École des beaux-arts de Québec. In 1955, she presented her first solo exhibition at the Palais Montcalm in Quebec City and won the first prize in painting at Quebec’s Exposition Provinciale. In 1957, at 24 years of age, she was honoured with an exhibition at the Montreal Museum of Fine Arts. The following year, after a promising start to her career, Maltais left Quebec for France, where she would pursue her research in abstraction over the course of the next decade, while also travelling extensively through Europe. From then on, she divided her time between her studios in Paris; Hydra, Greece; Saint-Isidore, Quebec; and Quebec City. In 1959, Maltais was awarded the first prize at the Salon de la jeune peinture (Young Painters’ Salon) in Montreal. Her career fell into two distinct periods: the first imbued with post-Automatiste movements, the second marked by a radical turn toward figuration. The Musée d’art contemporain de Montréal holds around fifteen of Maltais’s works in its collection, a sign of the importance of her work in Quebec art history. Marcella Maltais passed away in Sainte-Anne-de-Beaupré a few years ago, following a prolonged sickness; she was 84 years old. 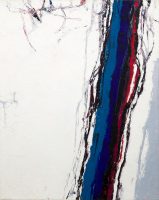 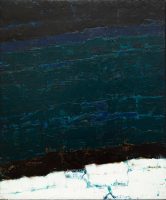