Philip Surrey was born in Calgary, Alberta, in 1910. At the age of 16, he took his first art lessons at the Winnipeg School of Art, under Lionel LeMoine Fitzgerald and George Overton, and became friends with Fritz Brandtner. During this period, he began painting nocturnal urban scenes lit by street lamps and restaurant lights. In 1929, he moved to Vancouver, where he worked as a graphic artist at Cleland-Kent Engraving while taking evening art classes with Frederick Varley and Jock MacDonald at the Vancouver School of Decorative and Applied Arts. In 1936, Surrey spent three months at the Art Students League in New York, where he studied with Frank Vincent DuMond. The following year, he settled in Montreal and found work at The Standard newspaper, where he would remain for 25 years. In 1964, the paper’s publisher gave him the opportunity to paint full-time under salary. For the next 12 years, he devoted himself to his art practice and presented many solo exhibitions. A founding member of the Contemporary Arts Society, Surrey was awarded the Canadian Centennial Medal (1967). In 1981, he received an honorary doctorate from Concordia University, and he was made a member of the Order of Canada the following year. Surrey died in Montreal on May 7, 1990. 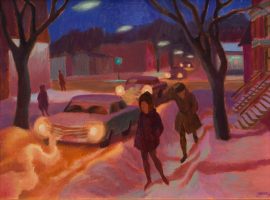